ith Charts In Action, you'll get free stock charts with all our technical analysis methods applied.

When we come across market examples which clearly illustrate a charting technique or trading method we've presented, we'll place it here.

Or... share your own stock chart analysis by contributing to our Web site.

Take advantage of our free stock charts and gain the confidence to do your OWN market analysis.

Check-out our latest charts at StockTwits...

Want these charts when they're first posted?

In a previous issue of Chart Wealth, we said Checkfree Corp. (CKFR) would complete an intermediate fifth wave impulse near the $53 to $57 price range... 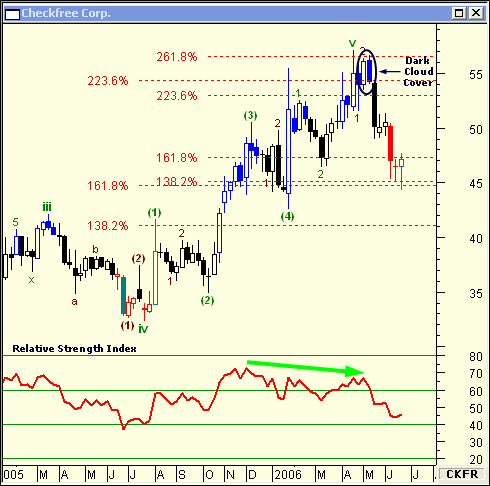 Additionally, the relative strength index showed a divergence from price, signaling the completion of the impulse wave.

Finally, the Dark Cloud Cover candlestick pattern confirmed the top was in place.

In a past issue of Chart Wealth, we predicted Newmont Mining Corp. (NEM) was ready to ascend to a price target of $52 to $55... 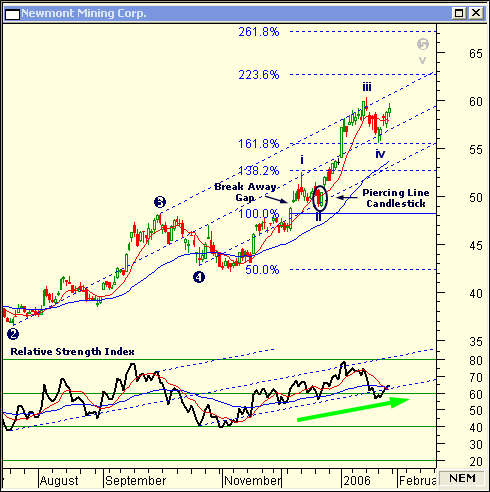 With the completion of the 50 percent retracement of wave 3, NEM was now ready to move up.

The break-away gap on 12/6 was a hint NEM might quickly exceed its price target area.

On the first trading day of the New Year, NEM blew through its price target with a long-ranging day.

Recently, NEM completed a minor wave 4 and continues to climb within its trend channel.

In a previous issue of Chart Wealth, we said Vertex Pharmaceuticals Inc. (VRTX) would trade to a price target between $22 and $24... 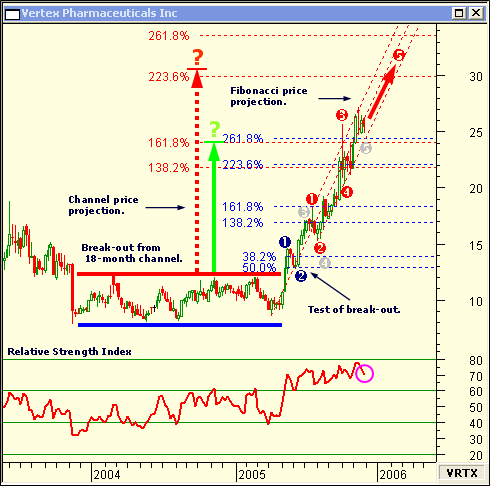 During the week of 9/30, the target price range was easily reached and exceeded on the weekly chart.

Based on the newly projected Fibonacci extensions, the end of wave 3 occurred at the 161.8 percent extension and the fifth wave termination should occur between $30 and $34.

Note... although the channel break-out price target was met, it was based on an incorrectly proportioned channel. In the updated chart, the new break-out price projection coincides with the new Elliott and Fibonacci projections!

Which is the correct projection? We don't know, either.

Our conclusion is the channel break-out analysis is flawed and should be ignored.

Contribute Your Charts To This Web Site

In a past issue of Chart Wealth, we called for Halliburton Co. (HAL) to reach a price target between $63 and $67.

On 9/1, the minor fifth Elliott Wave hit the low-end of the price target and continued straight through -- eventually topping at $69.78.

Looking back, if we measure a 161.8 percent Fibonacci price extension from the beginning of wave three, the end of the fifth wave is nailed, precisely!

When the relative strength index broke below its trend line on 10/3, the fifth wave top was confirmed.

Give Back To The Trading Community...

In this chart, it looks like Alaska Air Group Inc (ALK) is on its final decent.

The trouble began when the Engulfing candlestick pattern formed on 1/3 near the previous high.

Once the price broke support at $31.50, the Double Top was confirmed.

The Bearish Divergence pattern in the Relative Strength Index signaled the end of the trend and that unfriendly skies were ahead. 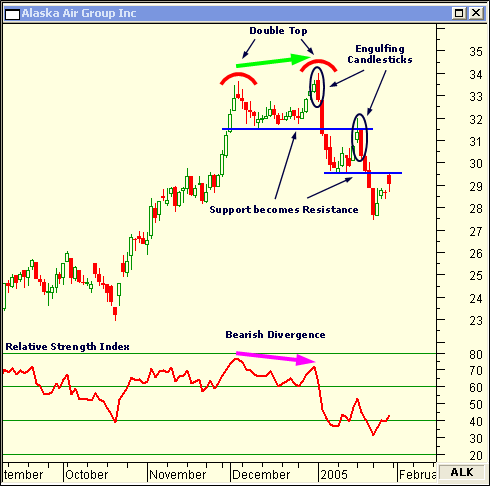 Discover the "Hidden Order" in All Markets...
Download Your FREE Special Report, Now!

Completion of a fifth Elliott Wave and the Dark Cloud Cover candlestick pattern are strong evidence Intuit, Inc put in a short term top on 10/04. 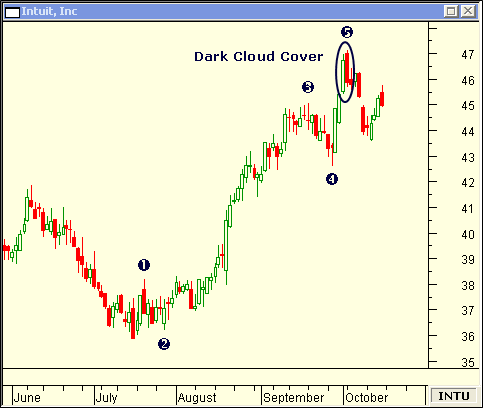 
For the Record | Site Map